In the major crops, tomato, cucumber, sweet peppers and egg plants, there are several plant types are available to use. The biggest variation in plant types is seen in tomato (grafted yes or no, pinched on cotyledons or on the 2nd leaf, plant age), the smallest in sweet pepper (plant age). Along with the differences in plant types go the different block types. As 10*10*6.5 is a standard dimension in the three biggest crops, nowadays especially in tomatoes blocks with different sizes like 10*15*6.5 are used, and even differences in height are occurring (7.5 up to 10 cm). Blocks are very well able to give added value to a desired plant type, meaning steering with water content and EC of the block. Especially when the irrigation strategy at a propagator works on plant quality and it is not limited by the block volume. When these two factors are very uniform, all plants will react in the same way, which will increase seriously the uniformity of quality of a batch of plants. Blocks with a great re-saturation capacity, produced by Grodan and named Plantop Delta or Problock, will benefit to that.

In this article the plant types in cucumber crops are discussed including the possibilities with the blocks for a propagator and a grower. Conditions spoken about are always the ones of the North European region.

Several different types of blocks are used for propagating vegetables. In the last years Grodan experienced that with an interaction between blocks and slabs a serious contribution of the blocks to the final result can be claimed.  This means that the water content (WC) of the blocks will follow the water content of the slabs at about a 10-15% lower level and the two will become a unit. This can only happen when the blocks and slabs have the same re-saturation capacity, like there is seen with blocks and slabs of the NGS-technology of Grodan. The re-saturation capacity is arranged by new fibre technology in the blocks; and it keeps on working the whole season. Extra advantage by this is the uniformity between the blocks, because the binder is stable all blocks will react the same, which is perfect for the plant conditions.

Slabs and blocks becoming a unit will firstly create uniformity in WC, which is always an advantage as plants benefit from stable circumstances. It starts already at equal and quick rooting and rooting through phase 1a and 1b. But as well when tomatoes are facing their pre planting period, sweet peppers and cucumbers stressing for fruit settings in the low light period, uniformity of water content is extremely important to create a similar reaction at all plants.

Second advantage of blocks and slabs as a unit is the maximized use of the available volume. As the growing volume is simply available, it’s for the best to use it!!

As cucumbers are changed several times in a year, up to 4 times, the rooting in the slab is very important. The roots created at the propagator will die cause of the sunlight fallen onto them. Second reason of dying is the damaging done by packing, transport and planting. So finally it will be a lot better when more and more roots stay inside the blocks instead of underneath the blocks. Grodans Plantop and Problock create a very uniform air-water-ratio inside the blocks. The roots do not necessarily need to go to the bottom of the block to find oxygen. Therefor more and more roots will stay inside the blocks, won’t be damaged by sunlight or transport and will take over at the moment of planting. That will seriously speed up the rooting in of the plants in the slabs and give these plants an advantage looking at the amount of days before the first harvest.

So, first of all it can be concluded that the different plant types directly influence the grower’s target. But secondly, it’s for sure that blocks with a great re-saturation capacity like Grodans Plantop and Problocks can add extra value to that by helping plants out with uniformity of water content (WC), use all the available volume and give growing possibilities for fresh, young roots so they can contribute to a higher average fruit weight after the longest day. 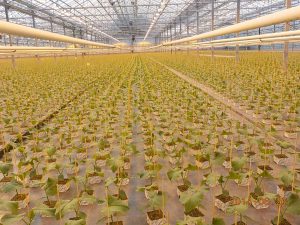 Overview of propagated cucumbers in the winter

This year an ‘old’ crop type became popular once again in the Netherlands, the pinched one on the 3rd real leave. Normally almost all growers use a single headed one, with 14.000-15.000 plants / ha. With pinched plants growers need less plants per ha, about 50%. This is mostly done in second or third crop. Possible other advantages like better or longer fruit quality and more production can be a market issue, but are not agreed by all growers. Fact is that plants are reacting very generative on pinching, meaning a ‘generative’ grower / growing system / glasshouse could better think twice before using a pinched cucumber. Last but not least is the influence of a variety, the strongest ones can divide all their power in two shoots so they are better useable for pinched ones.

Recommended block type is a 10*15 block, as two stems have to grow on a plant in a uniform way. Volume is important to that, and it will be for the best using a bigger volume. As described earlier in this article the change of crops in cucumbers happens several times a year. To have a fast rooting in the slabs as possible, the roots could better stay inside the blocks during propagation.  This will seriously happen with capillary blocks where the air-water-ratio inside the blocks is ideal for the roots. These roots will get into the slab when the plant is getting too big for the volume of the block, so when there’s more need for water as the block can give. 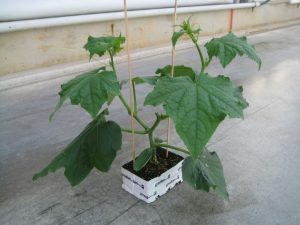 Grafting is not done in a cucumber crop grown on a substrate but only in soil. Reason is the fact that so far rootstocks are not bringing any extra production per m² to compensate the extra costs. Just in case of serious infections like f.e. Fusarium, and a need for cue’s, grafting can sort out this problem.

The most used plant type used is the single headed one. Differences in this type occur in sizes; even regional differences (in the Netherlands) are common. When the planting moment is earlier (December) the plants are smaller (40 cm high and 5-6 real leaves). A later planting period like (late December – January) is demanding bigger plants (50 – 55 cm high and 6-7 real leaves). 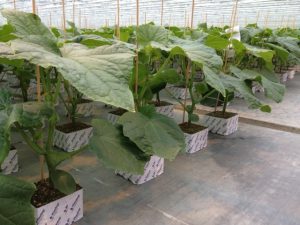 The bigger the plant for the 2nd and 3rd crop, the smaller the period will be until the first moment of harvest. As prices in cucumber can fluctuate enormously, economically seen it doesn’t need to be an advantage to harvest very quickly after re-planting a 2nd crop / 3rd crop. But from a grower point of view, with as much kilos or fruits per m² in mind, it’s inevitable to start the 2nd or 3rd crop with a big plant to shorten the non-harvest period as much as possible. Therefor plants need to be compact, generative with the first fruits on it and having a strong and healthy root system.

For a single headed plant the normal sized blocks of 10*10 are recommended. Earlier mentioned capillary blocks will give the same benefits for roots and plants with this plant type.

A big plant of about 50 cm will be the most profitable one in North European winter condition, because it needs leaf area to grow. Plants cannot stand too many fruits on the stem.

In the 2nd and 3rd crop a big plant of 50-55 cm is the best, this can take care for a superfast re-harvest, when light conditions are as well in favour.

Pinched plants are once again in the spot lights, and can normally be a fine alternative for the single headed ones. Not as many plants are needed and the plants are reacting nicely generative on the pinching itself. Risky in this can be that the climate,  grower, growing system and or substrate can become too generative in total, so production and quality stay behind. 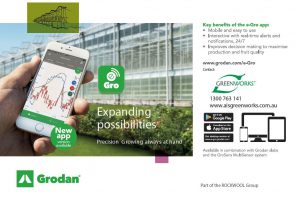