The topics which follow puts focus on actual developments in Aqua-Hort.

The first few cucumber producers using Aqua-Hort came on many years ago, with Nymarken and Brdr. Bredskov as the first ones. Then the installations were rare for some years. In the last three years installations has picked up again, and is now accelerating fast. The user group includes growers in: Denmark, Norway, Finland, Russia, Belarus, Slovakia, Austria, Switzerland and France. When the growers are asked why they install Aqua-Hort in their cucumber crop, the first answer is: No more Pythium in the crop. The next answer is: Good growth and Easy to handle, is not in conflict with other aspects of the cultivation.

For the growers shifting into organic growing where fungicides no more are available, it holds Phytopthora and Pythium down. Recent spraying against Mildew in the cucumber crop has been initiated. The first feedback is promising. More trials will follow in 2018. Offers have been made to several cucumber growers who want to install Aqua-Hort machines soon. Austria is right now taking the lead in this development. 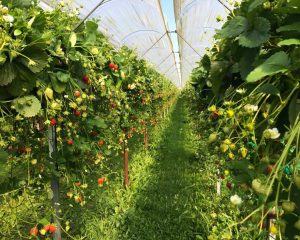 The development within strawberries has been promising in this season. The growers are reporting less or no Phytopthora problems. Strong plant growth and very few plant losses is part of the outcome. The picture shows a table top crop where Aqua-Hort is installed. The production is in top, with harvesting going on far into the month of October. Less Mildew and Botritis is also reported. With more spraying trials, it is planned to extend those to strawberries, with the purpose of reducing the Mildew problems.

Aqua-Hort is used for strawberry production in: Italy, UK, Holland and Denmark. In the coming season several more countries will taken up. The rapid development of production under cover makes this possible.

Mildew, Powdery and Downy, is a nuisance in many crops. Roses and strawberries are two such crops. Potato Blight (Phytophthora infestans) is another leave based pathogen causing much damage in potatoes. Spraying of plant foliage has been up for attention for many years. Recently some trials show that results can be obtained by this method. It is now a question of
refining application areas and dosing levels.

The work started out with spraying of wine in Geisenheim, Germany, then fruit trees in South Tyrol, Italy. In 2017 trials were made on potatoes. Some positive results were obtained, but more trials are needed. The open air cultivation complicates the application.

Also this year were trials made with spraying of cucumber plants attacked by Mildew in Austria. The effect was definitively positive. Several cucumber growers in Austria will implement the method in 2018. As for the technical side of foliage spraying, with higher ppm levels than by normal watering, it should be mentioned that the Aqua-Hort controls are supplied with an dual level function. It means the machine can be brought to dose with two different levels automatically. 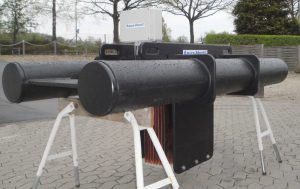 Several growers have asked about how the Aqua-Hort boat is installed in practise. The boat model I used for algae control and for production of Aqua-Hort water in large volume irrigation installations like large scale outdoor hardy nursery stock production. The following comments serves to clarify the matter.

1: Boat placement. The boat is placed in the water reservoir close to the shore. No need to place it in the middle of the reservoir as the “natural” water movements will carry the charged copper to all corners. The boats is fixed either by ropes or by steel rods driven into the bottom. If the reservoir is lined with a plastic or rubber cloth this last method is not applicable.

2: Controls placement. The controls are placed at the banks of the reservoir or nearby. Some climate protection is provided.

4: Controlling. The Aqua-Hort controls are provided with a Virtual flow facility and a timer. When the Virtual Flow and the timer is set, a certain ppm level will be achieved in the reservoir. By using the HANNA test set, the necessary feed back is achieved for adjustments.

5: Electrode Replacement. The copper electrodes are mounted in a cassette which may be lifted out of the boat. After the new electrodes are put in, the cassette is lowered back into the boat.

Prof. Wohanka in Geisenheim did in 2007 make a study of the Aqua-Hort effect on Ralstonia. The outcome is illustrated below with an extract from his report. The CFU count is zero after two hours with 2 and 4 ppm dosing. In other words very good effect.

Recently two growers, one with tomatoes and one with Cut roses, contacted me and informed that the big Ralstonia problems they had were stopped after starting to use Aqua-Hort.

The dosing levels applied by the Aqua-Hort users varies between the installations. This reflects the different growing practices and circumstances. The data brought here are based on observations from a majority of the 900 machines in use.

The benefits of using the Aqua-Hort system can be summarised as follows:

1. Prevention and curing of fungus and bacterial pathogens
2. Better Root growth and plant production
3. Dynamic system: Active constantly in the whole cropping system
4. No conflicts with beneficial fungus and bacteria
5. No burning of roots and leaves. No Chlor load in the crop
6. No handling of chemicals
7. Easy operation and maintenance
8. Low costs

1: Greenish slurry might clog the filters. It has been observed that this sometimes happens when phosphorous acid is used. If possible use nitric acid instead of.